We had an appointment with Overland Marine at 11am.  Which suddenly turned into 10:30am with a phone call on the morning of September 23rd.  So we made a quick stop at the Andyman for bagels and coffee and headed down to Newburyport.  We hopped in the dinghy, still tied up where we left it, paddled out to RodeTrip and headed upriver.  Dad called the Gillis bridge and requested an opening.  The bridgemaster happily obliged. 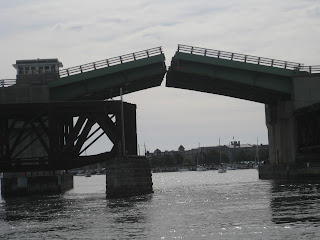 This is what I usually think of as a classic "drawbridge"  the chart lists it as a Bascule bridge.  Here is the Rt. 1 Bridge opening just for us!  First time I've ever requested this and it went very smoothly.  We even got a compliment from the bridgemaster.  He called us on the radio after we went through just to find out what kind of boat we had, because he thought she was good looking!  That's our boat!
We made it to the ramp at Cashman park right on time, and began straightening up a bit.  We hadn't finished completely when the crew arrived.   Three guys from Overland came to the dock and took charge right away.  I have all good things to say about the entire experience.  I was a little nervous having never pulled RodeTrip out of the water before, and we were about to do it with a trailer instead of a travelift.  It went off without a hitch, although it took several people get the boat off the dock where it was pinned by the current! 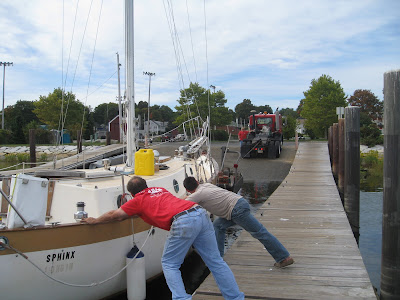 The hydraulic controls lifted RodeTrip right up, and it looked like he was driving a remote control the whole time! 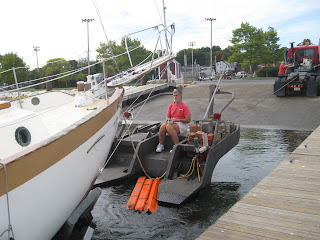 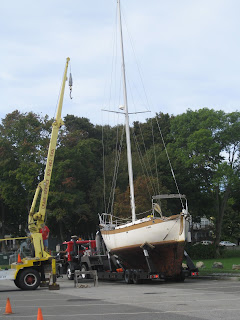 We had to pull quite a bit of wiring out of its neat zip-tied runs along the top of the cabin in order to allow the radar cord to come out and be coiled with the mast.  Apparently you cannot cut the cable and splice it back together later, or it is really difficult.  After the mast came off, they dropped us off at our vehicle and told us to meet them at the yacht yard in a half hour.  We went and got a quick cup of coffee at the plum island roasters, and then headed up to see RodeTrip. 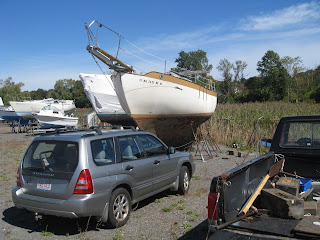 She looks a little naked without her mast!  We started on the pressure wash before the bottom dried, and it took a little while! 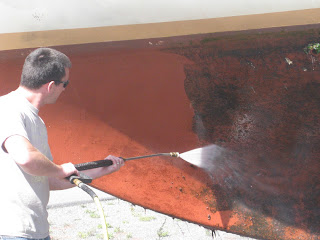 Here is Brian doing a little bit of work for the camera, and here is Bruce actually doing the pressure washing! 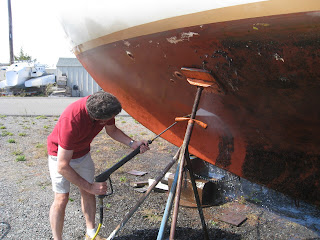 And here she is halfway to being clean. 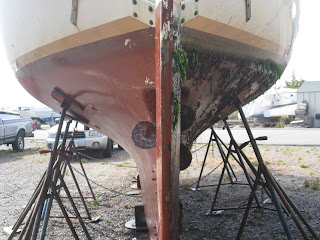 We were just about finished with the scrubbing ( pressure washing)  and were busy cleaning the bottom of the keel when we got a little bit of a nasty surprise, it appears that we have one of those Westsails where the joint between the two hull halves needs to be filled.....or at least that is what we are hoping right now.  This pictures is of the very bottom of the deepest part of the boat. 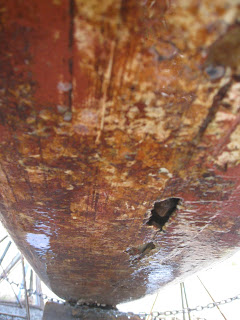 It looks like at the very least we are looking at taking a grinder to the bottom of the keel and filling the void here with epoxy, fiberglassing over it and then repainting.  That sounds like a lot of work, and that is probably what will be happening later this winter.    For now RodeTrip is sitting pretty at Overland Marine and will wait patiently for us while Stephanie and I go on our delayed honeymoon to Kauai!  Thank you Aunt Margaret and Uncle Barry!  We'll be staying in Princeville for a week and we are very excited.