Coming out for the winter..... 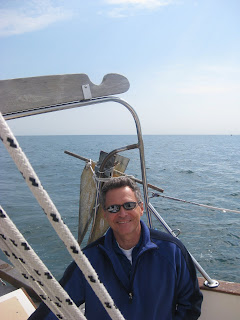 So Bruce, Brian and Mark were scheduled to sail RodeTrip from Portsmouth, NH to Newburyport, MA in order to get her hauled onto the hard for the winter on September 22nd.  Mark went and did something terribly inconvenient and got a job.  So he headed off to Rhode Island to start work on the 23rd, and Bruce headed up to Amesbury to start the process.  We had a good weather forecast....except for the wind direction, so we ended up beating upwind towards Newburyport.  Not a big deal because we weren't in a hurry.  We took a very long first tack all the way out to the Isles of Shoals.  Dad's first trip out to the Isles. 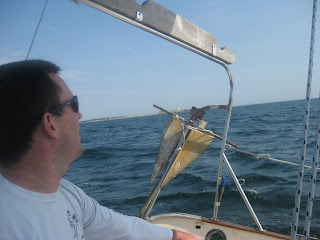 I haven't figured out how to upload a GPS track to the computer yet.  Hopefully I will eventually insert the track for this trip here......don't hold your breath for this one to appear though.

The trip down had great wind, and a few highlights including my first ever sighting of an Ocean Sunfish!  These fish look so weird, but really neat. 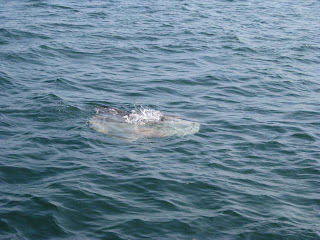 We were sailing along when I spotted a fin out of the water.  It didn't look like a shark fin, and was moving quite slowly, so we tacked around to a look and see how close we could get.  We got as close as we wanted, in fact we circled this fish 3 times and got him within a couple of feet of the boat.  He seemed to completely ignore us.  The fish was probably 4-5 feet long, and looked like he was probably that wide as well.

If you look closely you can see the fin coming out of the water in this video clip.
This is an interesting website, and I reported our sighting here http://oceansunfish.org/#

The trip to Newburport continued on afterwards.   We arrived at the mouth of the river at precisely the wrong time.  The tide was running out HARD.  We decided that we'd rather continue sailing, and headed down along plum island.  It was gorgeous and when we turned around we had some very high ( for our boat) speeds running downwind back to the river.  Once we got there it was interesting dodging the dredgers that were operating in the mouth of the river.  I was pretty nervous, and it was hard to tell where they were heading all the time.  In addition the current was still running very hard and we really had to work the engine to make headway.  This picture was taken after all the danger was passed......funny we didn't think to grab the camera when the barge and tug were headed nearly at us in the channel.  During the whole event, we were trying to stay in the channel as much as possible.  The fishing boat in front of us decided to skip a channel marker and ran aground.....looked like a pretty sudden stop, followed by a slow backing up all the way to the channel. 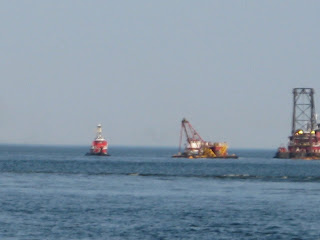 We tried to let go of the stress and have a nice trip up the rest of the Merrimack river to Newburyport.  The Merrimac is not like the Piscataqua in just about anything but the currents involved.  The Merrimac is much shallower, so seeing depths like 8-10 feet on the depth sounder is a little unnerving when I'm used to seeing numbers like 60-70 while in the channel.  We didn't bump ground on our way in, so I guess that means we didn't wander too far outside the channel. 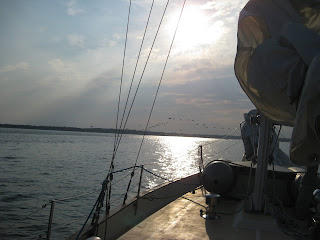 We arrived in Newburyport, pulled up to the dock and went to visit the harbormaster.  Fall hours are apparently by appointment only.  We called his cell, and get checked in for an overnight on one of the three moorings.  We took the sails off the boat, disconnected the boom and stowed it below.  It was a little bit sad taking the boat apart for the season.  We finished up about the time it was getting dark, and stopped at a nearby boat to let the owner borrow our flashlight so that he could see the combination on his lock to let himself into his boat.  The flashlight only helped a little bit.....he indicated that he had a "hard day of sailing".  We headed back to the car and got cleaned up and went to dinner before driving up to Portsmouth to get my car back.