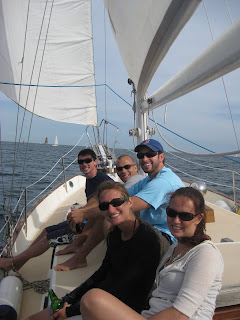 On August 14th we had the largest crew yet out on RodeTrip.  This was the first time we had to take more than one trip in the dinghy.  Justin came up from Boston, and Tony came down from Portland and everyone had a blast.  We sailed out of the Piscataqua and made a big loop down towards Odiorne point, and then back up the river.  It was a bit of  a drifter, but we had enough cold beer (brought by the crew) to keep the crew from getting restless. 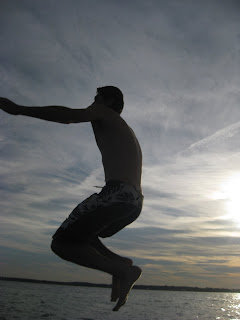 We were drifting along when Ryan, Tony and Justin decided that a man overboard drill was in order!  They didn't know that we weren't going to turn around for them. Being strong swimmers they grabbed onto the dinghy and went for a surf ride before they pulled themselves back to the boat. 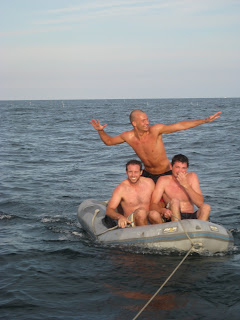 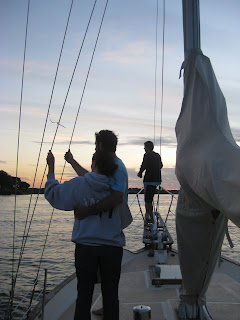 Our trip home involved fighting the tide more than usual.  This goes under the lessons learned section of sailing.....the MIGHTY Piscataqua is named called mighty for a reason.  The river almost didn't let us back to our mooring.  With Perkins rowing at near full power we were just about stopped in the river going by the coast guard station.  Everyone enjoyed the sunset, while Stephanie and I were in the cockpit debating if we were actually moving upriver at all.